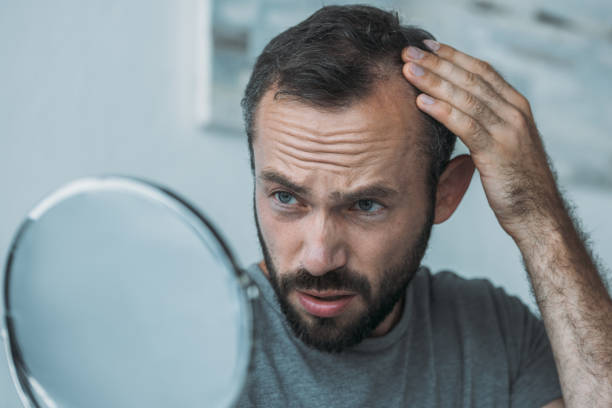 The hair follicles taken from the donor area within the scope of the transplantation operation are traumatized because they are separated from the body, and with the effect of this trauma, they go on the defensive and put themselves into sleep. Hair loss, which is referred to as shock shedding, also occurs.

Hair follows the anagen (growth), catagen (pause) and telogen (rest) stages during the growth period. During this cycle, the hair sheds a few times and grows again. The reason for the shock loss after transplantation is that these newly transplanted hair follicles want to start a new growth cycle. When the channels opened to place the hair follicles begin to heal, that is to close, the hair remaining on the skin is broken and shed, the root part remains inside and continue the normal growth cycle. Hair follicles continue to grow from where they left off after shock shedding after hair transplantation, which brings the growth phase of the hair back to the head. This shedding also allows quality hair growth after hair transplantation.

When Does Shock Shedding Begin?

Although there is no clear time frame for shock loss, it is generally observed that it occurs between the 3rd week and 3 months after the hair transplant operation.

How much will it take?

When Does Hair Grow After Shock Loss?

As a result of the shock loss, the hair that goes through the sleep phase can grow back in 2 or 3 months. Since this process is temporary, the hair will grow again sequentially. After 3 months, new hair will continue to grow permanently. At first, thin and curly hair will become thicker over time and will come out in its own form. Since it will take 1 year for the hair to regain a completely natural form after hair transplantation operations, the process should be waited patiently.

Since shock loss after hair transplantation is a natural result of hair transplantation operations, it is not possible for the person to prevent it. Since the hair will start to grow healthier after the shock shedding, it will be more beneficial for the person to overcome the stress-free process. However, there are studies indicating that shock loss is less experienced as a result of using various drugs. For example, in the study named “Cyclical medicine for hair loss management and improved results in hair transplantation”, conducted on 500 people and followed up for two years, it was revealed that drugs such as amino acids, iron, calcium, zinc, minoxidil and finasteride grow hair faster, It was stated that it also prevented shock loss.

Can Shock Spill Be Reduced?

During the hair transplant operation, it is said that the tactics such as collecting the hair follicles by hand, holding the root at the end rather than the root, not keeping the root outside too long, keeping it at the appropriate temperature (4-5 degrees) and in nourishing fluids are said to reduce post-transplantation shock loss. These tactics are thought to cause less trauma to the hair follicle. However, there is no strong evidence that all these tactics will be the definitive solution.

Does shock loss happen to everyone?

What happens if there is no shock shedding?

Will there be shock shedding in the donor area?

Things to Consider During the Shock Spill Period

Continuing to use the shampoo recommended by the doctor,
In addition; Taking advantage of PRP and hair mesotherapy applications can also benefit the nourishment of the new follicles and their faster and healthier growth.